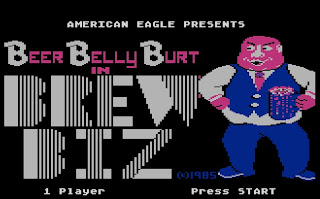 Love that clunky ol' game. Alas, I don't have the time to properly enjoy it anymore. But it does feel kind of weird actually being able to finish the game. The version I have on five inch disk was a corrupted version that didn't have a complete 'Shipping' level. And yet, I would always hope that it was. Now that I've got the complete version, it's somehow anti-climactic. Ain't that always the way?
The nice thing about the Atari emulator is that it lets you save your current state in whatever game you're playing. As usual, like everything in life, it's a good and bad thing. Fortunately for me, I planned ahead and saved a bunch of Brew Biz states. Forgot about that!
So, where does it fit in the big paradigm? Well, it's more of a Donkey Kong than a Pac-Man or Space Invaders. Also, it's apparently not made by the folks who gave us Ollie's Follies and Ghost Chaser... or is it? Kewl! It is! Ollie's Follies by American Eagle! Ghost Chaser says Artworx, but it's Frank Cohen! Of Cohen's Towers fame, no less. But I'm not as familiar with that one. I keep getting hit by a falling flower pot. Some games just don't want you to play them.
Posted by The Movie Hooligan at 11:09 AM